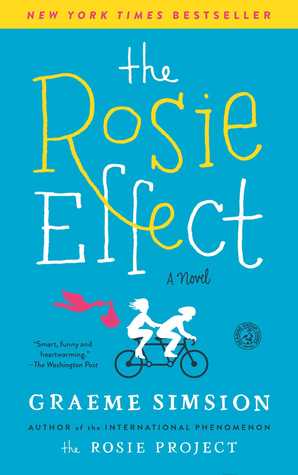 The Rosie Project by Graeme Simsion

Here is the summary from the back (goodreads):

“The highly anticipated sequel to the New York Times bestselling novel The Rosie Project, starring the same extraordinary couple now living in New York and unexpectedly expecting their first child. Get ready to fall in love all over again.

“Don Tillman and Rosie Jarman are back. The Wife Project is complete, and Don and Rosie are happily married and living in New York. But they’re about to face a new challenge because – surprise – Rosie is pregnant.

“Don sets about learning the protocols of becoming a father, but his unusual research style gets him into trouble with the law. Fortunately his best friend Gene is on hand to offer advice: he’s left Claudia and moved in with Don and Rosie.

“As Don tries to schedule time for pregnancy research, getting Gene and Claudia to reconcile, servicing the industrial refrigeration unit that occupies half his apartment, helping Dave the Baseball Fan save his business, and staying on the right side of Lydia the social worker, he almost misses the biggest problem of all: he might lose Rosie when she needs him the most.

“Graeme Simsion first introduced these unforgettable characters in The Rosie Project, which NPR called “sparkling entertainment along the lines of Where’d You Go Bernadette and When Harry Met Sally.” The San Francisco Chronicle said, “sometimes you just need a smart love story that will make anyone, man or woman, laugh out loud.” If you were swept away by the book that’s captivated a million readers worldwide, you will love The Rosie Effect.”

This is the sequel to the oh-so-cute The Rosie Project. I loved reading this book and I was reluctant to read it before because I felt I would not be able to relate to the situation. Being married and having a baby… not really at that point in my life. Then, out of nowhere, I felt the need to read the book. I enjoyed it like I knew I would and I felt like it was more relatable. Two weeks later, surprise, surprise I found out I’m expecting my first baby. I immediately felt like I had to research everything and I almost fell down that Don rabbit hole, but I noticed quite a bit of conflicting information, so I relaxed which is not something Don is capable of doing.

Don goes through a series of obstacles that add up to a slight change in his behavior by the end of the book. At first, he was unsure of his ability to be a good parent and his approach to the situation was as intense as his approach to finding a wife in the last book. I found his anxiety and fear relatable and I even found Rosie’s desire for a perfect relationship relatable as well.

Don’s observation of repeating patterns opened my eyes to repeating patterns in my life. My approach to parenting is going to be very similar to the way I was brought up and my boyfriends approach to parenting is… well, wrong by comparison. Finding a middle ground to both our approaches is going to be difficult, but I do not think it will go the same route as Rosie and Don.
I would recommend this book to anyone who enjoys family fiction. There may be some strong language in here for teens, but nothing more than they would hear in an edgy PG-13 movie. It’s definitely a nice read for couples just starting a family or even people who already have kids and enjoy reading about marital hiccups. A person could pick up this book without having read the first book and get through the story just fine. It had been such a long time since I read The Rosie Project that I could not remember the relationship of all the characters. I powered through and eventually everything was put back in order for me, so I’m sure this can be read without the prior knowledge provided by the first book.

Use the tags to find more titles like this. Tags may contain spoilers.